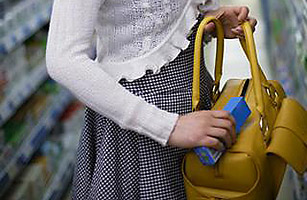 As the recession drags on there are new reports coming out about an increase in the shoplifting rate worldwide.  With more and more people out of jobs or taking pay cuts it seems some are finding it that much easier to justify a five-finger discount.  Though it may not seem like it to the thief, the ramifications of a rise in stolen goods will only hurt the consumer in the long run.

A recent article from Time magazine reports about a recent survey released from the Center for Retail Research that reveals shoplifting incidents are up by 6 percent this year which represents a whopping $115 billion in business losses.  The article also reports that the "new shoplifter" is surprisingly a member of the middle class and will most often steal things like expensive cheeses, mobile phones, and cosmetics.

Joshua Bamfield, director of the Britain-based Center for Retail Research reports to Time why the middle-class are finding it easier to shoplift.  Bamfield says, "In addition to the usual criminals, you have lots of newcomers to stealing who figure they don’t run much risk at getting caught, won’t pay much of a price if they are and justify their actions on the hard times we’re all facing."

A recent survey also reveals that a good number of these new shoplifters do not steal out of necessity to feed their loved ones and they see nothing wrong with what they are doing as long as they take from larger corporations or fancy stores.  These people may not realize that in the long run we will all end up paying more for their actions.  As companies absorb the cost for the losses they take due to the increasing number of shoplifting they mark up the price of their products which ultimately will affect the consumer.

What do you think about the reports of the increase in shoplifting this year?

What do you think should be done to bring those numbers down?