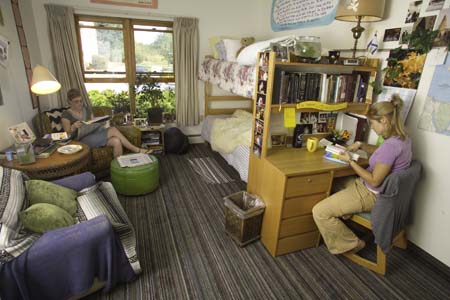 Many think of living in college dorms as almost a right of passage or a stepping stone between a childhood home and the real world. But with the rising cost of college tuition many more students are making the decision to live at home with parents while attending university.

A recent report from Reuters highlights the new trend many families have opted for as a way to make college more manageable. Even families whose household income exceeds $100,000 are becoming more and more likely to keep their kids at home during the college years. Right now it is estimated that 47 percent of college students whose parents earn more than $100,000 are still at home rather than dorms and this number is way up from just 24 percent in 2010.

And it’s not just the living situation of college students that shows how unmanageable college costs have gotten in recent years. Even wealthier families are taking out more in student loans than they did last year and more students are opting to attend lower cost schools to save money. In 2008 a reported 56 percent of families eliminated colleges from their wish-list because of the higher tuitions compared to a whopping 70 percent of families that are doing that now.

What do you think of reports showing a growing number of college students skipping out on dorm living and staying with parents to save money?

Do you think these students are missing out on an important step to independent living?