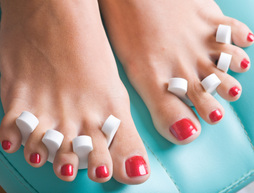 It’s spring, and things that have been in hiding all winter long are starting to peek out and make themselves seen. The cherry blossoms are reappearing in our nation’s capital, leaves are sprouting on trees, and insects and animals are starting to show their faces once more. People are putting away their heavy winter boots and coats in favor of airy garments and strappy sandals, meaning that our hands and feet are making their yearly debut, too. After we’ve shoved them into galoshes and gloves for months, we’re ready to step out with freshly pampered and polished finger- and toenails.

But as enjoyable as it is to have the occasional mani-pedi, nail salons can harbor some gnarly germs and bacteria. If customers aren’t careful, they could walk out with a lot more than just a fresh coat of California Coral. Before you turn your fingers and toes over to a nail technician, watch out for these signs of a not-so-sanitary salon.

No Licenses on Display
According to the International Pedicure Association (IPA), all states except Connecticut require nail technicians to be licensed, and most states require that those licenses be prominently displayed for customers. The licenses show that the technicians are adequately trained to perform the services they offer, and that they know proper hygiene procedures. If the salon’s license or the technicians’ licenses aren’t displayed or available for you to see, there’s no telling what kind of experience and/or education they have.

The Salon Feels Dirty
Check around for a general air of cleanliness. Is the floor swept, or are there piles of dirt and dust bunnies? Are the bathrooms clean and tidy, or messy and out of soap? Are dirty linens and other debris kept out of sight, or are they lying around customer areas? Is there adequate ventilation, or is the space stuffy and full of noxious fumes? How the premises are maintained can indicate a lot about the salon’s hygiene standards. It’s okay to be suspicious of any salon where the staff is eating lunch in the customer area, where spills or messes are allowed to fester, or where cleanliness just doesn’t seem like a priority. If it feels dirty, it probably is.

No Between-Customer Scrub-down
As you wait for your appointment, watch how the salon cleans up after previous customers. Water should be drained from the pedicure footbaths and hand bowls, which should be disinfected before being reused. Linens should be changed, and the whole area (including the chair) should be treated with disinfectant. The technician herself should wash her hands before and after working on a client, and it’s a good idea for customers to wash their hands before a manicure, too. Wearing masks and gloves isn’t a legal requirement, but it’s a good sign if you see salon staff taking these steps to prevent bacteria from spreading. If you witness salon staff reusing water, not taking the time to sanitize the area, or handling one customer’s feet or hands directly after handling another’s, don’t let them handle your own.

Reusing Implements
Everything that touches your hands or feet should be either sterilized or brand-new. Salons should at least soak their implements in a germicidal solution, and it’s even better if they use an autoclave, an appliance that destroys germs with heat. Drill bits, some files, pumice stones, scissors, and clippers should never be used on two clients in a row; they should either be dipped in a tuberculocidal solution for ten minutes or heated in an autoclave between uses. Since they can’t be disinfected completely, porous implements, such as emery boards, orange sticks, and toe separators, should be discarded after use. Using them on more than one client risks transmitting bacteria. The IPA encourages customers to ask questions about the sanitation procedures at salons, and to find out the specific rules and regulations in their state.

It’s a good sign if a salon allows customers to purchase and store their own implements. Many salons do, and then set those tools aside to be used only on you. If your salon doesn’t offer this service, consider buying your own set of tools at a beauty-supply store and bringing them with you to your appointments. Just remember to wipe them with hydrogen peroxide between uses.

Cutting, Clipping, Slicing, and Shaving
Many states, such as California, Texas, and Ohio, do not permit the use of credo blades or callus cutters for slicing calluses on feet. Even though some customers do enjoy the service, it’s often illegal, and if a salon is breaking one law, there’s a good chance that it’s breaking others. Cutting cuticles is often illegal, too, and even if it’s lawful, it’s still not a good idea. The cuticles naturally protect the nail bed from bacteria and dirt, and clipping them makes infection more likely. At the very least, if your salon offers these services and you consent to them, make sure that the technician uses a fresh razor blade every time she shaves calluses, and uses properly disinfected clippers on your cuticles.

If you have any open wounds, bug bites, rashes, or existing infections on your hands or feet, wait until they’re healed before you get a manicure or a pedicure. These conditions increase the likelihood not only of bacteria entering your skin, but also of your shedding bacteria that’s transmissible to others. The IPA also recommends that women avoid shaving their legs directly before a pedicure, since shaving could cause small nicks in your skin that could let in bacteria.

Manicures and pedicures are fun treats and well-deserved pampering that most women would be loath to give up. The good news is that it’s relatively rare to catch blood-borne infections, such as HIV and hepatitis, from a nail salon. The bad news is that there are still plenty of other fungal and bacterial infections?like yeast and staph?to be spread, not to mention common cold and flu bugs. If you experience a rash, redness, oozing, wounds, or any other sign that you could have an infection, see a podiatrist or your general physician right away, and if you believe your usual nail salon is practicing subpar hygiene, run?don’t walk?your perfectly manicured feet to another establishment.