The much loved and celebrated author, poet, and civil rights activist Maya Angelou has left us at the age of 86. Known for her wise words and many accomplishments the Renaissance woman is sure to live on in our hearts.

Angelou received more than 50 honorary degrees over her lifetime, published more than 30 titles and worked directly with Dr. Martin Luther King Jr. She spoke at least six languages and worked at one time as a newspaper editor in Egypt and Ghana.

One of Angelou's most revered books was "I Know Why the Caged Sings." A childhood tragedy stunned her into silence for years. When she was 7, she was raped by her mother's boyfriend. She testified against him and he was later beaten to death by a mob. "My 7-and-a-half-year-old logic deduced that my voice had killed him, so I stopped speaking for almost six years," she said. But from that silence grew once of the most influential figures of a generation.

The prolific artist was a frequent guest and friend of Oprah Winfrey and was also invited to read a poem at President Bill Clinton’s 1993 inauguration. In 2010, President Obama awarded her the Medal of Freedom, the country's highest civilian honor. 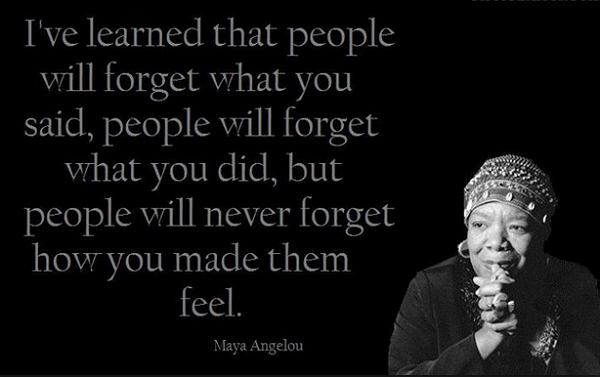 Angelou recently cancelled an honorary event she was to attend due to health problems. Her agent Helen Brann explains to ABC News after she was found unresponsive in her home by a caretaker “She'd been very frail and had heart problems, but she was going strong, finishing a new book. I spoke to her yesterday. She was fine, as she always was. Her spirit was indomitable.”

How will you remember Maya Angelou?

Are there any Maya Angelou quotes that you find inspirational?

when you have an attitude of gratitude you wake up saying thank you .... maya angelou

I will share and read her books to my children.

You can only become truly accomplished at something you love... pursue the things you love doing, and then do them so well that people can't take their eyes off you."

Love is like a virus. It can happen to anybody at any time. - Maya Angelou