In an effort to grab the attention of all those who made resolutions to get healthier in the new year, the fitness club Equinox has debuted a controversial ad depicting a model breastfeeding twins with the words , “Commit to Something” scrolled across the middle. Though some have voiced their opinion that the ad is in poor taste, others commend the fitness club for helping to normalize images of women breastfeeding in public.

Fox News reports about the ad and all of the controversy it has garnered on social media and from the well-known breastfeeding support group La Leche League. The ad depicts model Lydia Hearst looking glamorous wearing a dress and dramatic diamond earrings in the middle of a fancy restaurant while skillfully breastfeeding two infants. Part of the ads controversy comes from the fact that these are not Hearst’s children and she infact does not have children (let alone a set of twins).

One person offended by the shot wrote on Hearst’s Facebook, “Disgusting on two levels..1.no one wants to lose their appetite at dinner by seeing breastfeeding and boobs not being covered up (gross)...it takes away the rights of other diners, 2. They aren't even her kids (gross).......and furthermore, I breastfed....but I excused myself or covered up...WHY do some women think that their right to breastfeed in public means that they have to whip out an entirely naked boob just to make a point WHY?” 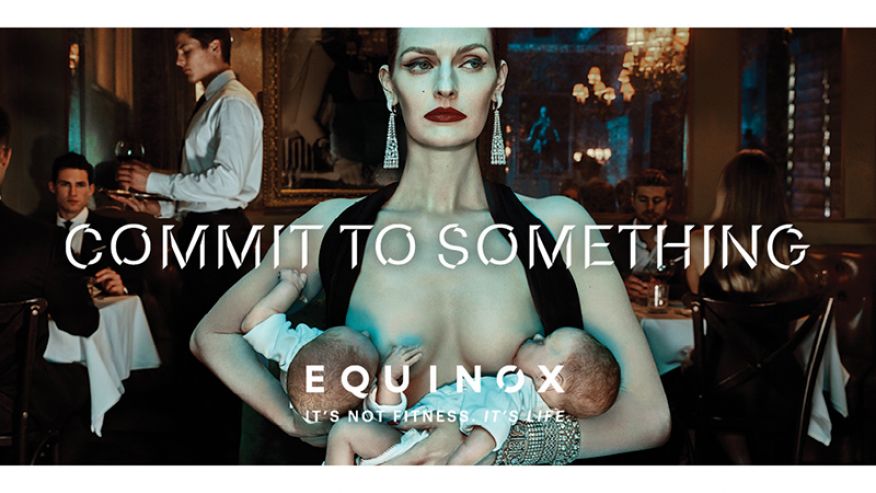 Rep. Leigh Anne O’Connor of New York’s La Leche League explained to FOX411 that she sees nothing wrong with the ad and is happy to see a woman publicly depicted in this way. O’Connor says, “My initial reaction is great. Let's normalize breastfeeding. Of course, the image more glamorizes the situation but I don't have a problem with that because breastfeeding is an everyday thing that is done at home in pajamas, out at weddings or movie theatres or restaurants, both fancy and low key.”

And for those who find the ad “disgusting”, Hearst explains how it is this kind of sexualized thinking about the breast that leads to women being discouraged to breastfeed outside their homes. She says, “I do not believe the breast is sexually used here. When critics call it disgusting to breastfeed in public or in ads I say that is a personal issue with the critics, they are uncomfortable with their own bodies and are projecting their feelings on others.”

What do you think of the image Equinox is displaying in their ad?

Do you think this ad helps to normalize breastfeeding or is it offensive?

Breastfeeding is not shameful and therefore doesn't need to be covered up. Great ad.

I breastfed all four of my kids and never needed to show the world my breast while I was doing it. I'm all for being able to do it wherever you need to , but where has modesty gone? There are others to consider in all aspects of life. It's disrespectful to expect everyone to conform to a particular point of view, especially when I don't want to see someone else's breast even if it's not meant to be a sexual thing. It's an ad, she's not the mother of the children. That's offensive to me, not that she's feeding them in public. Feed away and cover up your breast...I don't want to see it, respect what I want to do and see and I'll respect your right to feed your child where you want to.

This ad is great in that it is helping to normalize breastfeeding in general and in public! I believe breastfeeding is beautiful! My daughter has been breastfeeding since day one and we are still going strong at 10 months. I plan to continue this journey with my daughter for much longer. So happy for equinox and thank you for supporting mothers and babies!!

I'm so happy to see this. I think it helps normalize breastfeeding and we need as much of that as we can get.