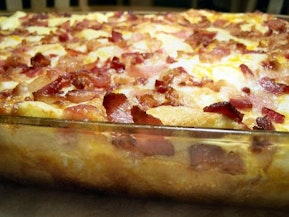 Instructions: Preheat oven to 375. Cut the slices of thawed French toast into 3/4 inch cubes. In a bowl, whisk together egg nog and eggs. In a large bowl, place half of the French toast cubes. Pour half of the egg mixture over the cubes and toss gently with spatula. Toss until cubes are well coated. Place the French toast cubes in a 9" x 13" baking dish that has been sprayed with non-stick spray. Next layer half of the ham, turkey, parsley and cheese on the French toast cubes. Using your same large bowl, toss together the remaining French toast cube and egg mixture to coat. Place the rest of French toast cubes in an even layer in the baking dish followed by layers of the remaining ham, turkey, parsley, and cheese. While the casserole bakes, combine the sliced raspberries with the jam. Bake for 30-35 minutes or until golden brown and set in center. Remove to cooling rack; cool 10 minutes.
Cut into 8-12 squares. Sprinkle the top of each square with a dusting of powdered sugar followed by a spoonful of the raspberry mix. Enjoy!!!

Other recipes in breakfast & brunch 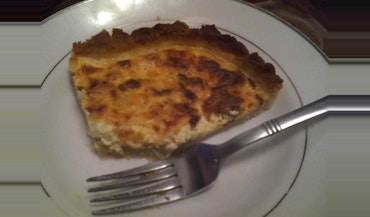 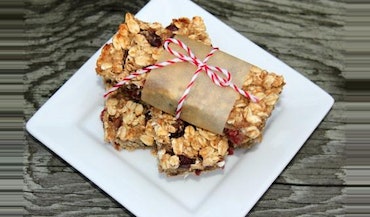 These low-fat granola bars are so easy to make and are a healthy snack on the go.
Read 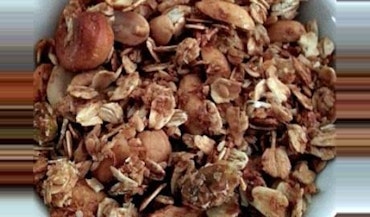 Sweet Maple Granola is a tasty cereal or snack! This recipe makes a huge batch. You can always store left-overs easily. I use airtight Rubbermaid conta…
Read