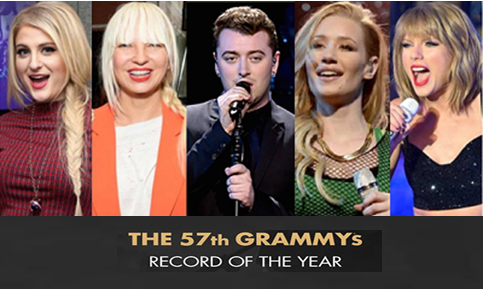 The Biggest Night in Music is here!

Can T-Swizzle shake-off both Sam Smith and Sia? Will Meghan and Iggy cancel each other out, or are they still contenders in the race for Record Of The Year?

Enter the SheSpeaks Grammy Awards Giveaway* & you could win a Chromecast HDMI Streaming Media Player to view videos & pictures from your phone or iPad- on your TV!

The 2015 Grammy telecast airs this Sunday on CBS and one of its highlights promises to be an
all-star mash-up with Sir Paul McCartney joining hip-hop superstar Kanye West and pop singer Rihanna to perform their new single, "FourFiveSeconds" featured here:

But in addition to live performances & red-carpet
moments, the main business will be the awards honoring excellence in music. One of the most prestigious is Record Of The Year for "artistic achievement and technical proficiency without regard to sales." It is awarded to the Artist and/or Producer (versus Song Of The Year which is awarded to the Songwriter of the lyrics/melody)
and this year's competition is as steep as ever!


WHICH of these FIVE NOMINEES do you think will win "RECORD OF THE YEAR"?

Prize Details:
Each of our lucky winners will receive this Chromecast HDMI Media Player!
TO ENTER, tell us in the comments below who you think will win Record Of The Year at the 2015 Grammy Awards

Thank you! Enjoy the show, and Good Luck to Everyone!

*This Giveaway is open now through February 18th, 2015 to US residents 18 years or older. Winner will be chosen at random.