Can Co-Sleeping Be Safe For Baby? 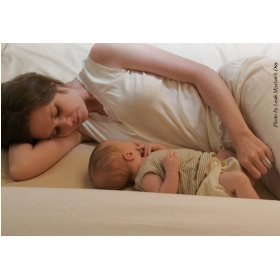 A new study recently released by the Center for Disease Control (CDC) shows a rise in accidental suffocation related deaths of infants who sleep with their parents.  According to the study, 315 babies were suffocated when a parent accidentally rolled over on them in bed during the years of 2003 and 2004.

CNN released a report with the study’s findings and also spoke with women who are both for and against parents co-sleeping with their young babies.  One woman by the name of Lisa West-Mullen urges parents to heed the advice of the CDC as she lost her 4-month-old when she accidentally rolled over on him in bed one morning.

Another woman from the report finds that sleeping with her infant to be perfectly safe.  Beverly Steiger said, “It’s really hard to explain, but you have such a heightened awareness when you’re exclusively breastfeeding your baby.  I would never, ever roll over on him.  It would never, ever happen.”  Pediatrician, Dr. Bob Sears agrees with Steiger.  He believes the CDC report doesn’t prove co-sleeping is really dangerous.  He stressed that if co-sleeping is done correctly it can be very safe.

There are other options of course for the parent who wants to sleep near their baby but worries about safety issues.  Devices like the co-sleeper, a crib that attaches to the bed, are made for parents who want to be in arm’s reach of their baby but don’t want to share a bed.  There are also small protective infant sleepers that fit right into the parents’ bed with hard sides that can prevent accidents.

To view the CNN video clip regarding the CDC reports you can visit:
http://www.cnn.com/video/#/video/health/2009/02/23/cohen.cosleep.dangers.cnn

What do you think about the latest CDC report that shows a rise in infant co-sleeping related accidents?

Do you think sleeping with an infant can be done safely?