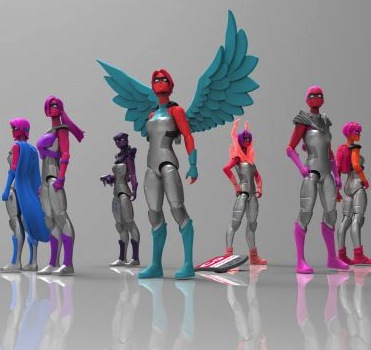 The idea that girls can only play with things like Barbies, baby dolls and tea sets while boys build with blocks and legos and play with action figures is thankfully becoming an outdated notion for many. This is why the New York based toy start-up IAmElemental’s creation of the first realistic female action figure has been such a success, winning multiple awards and returning to the North American International Toy Fair in New York this past weekend.

Read on and find out how you can win one of the IAmElemental action figures!

The toy company started a Kickstarter campaign back in 2014 where it saw great success by reaching their funding goal of $35,000 in just two days and far surpassing the goal as time went on. Time reported about the unique action figures in 2014 and how the creators worked to give girls (and boys) an action figure like they’ve never seen before.

Dawn Nadeau, co-founder of IAmElemental, explained how their dolls are different from the few female action figures we generally see in stores. Nadeau said, “The few female action figures that are on the market are really designed for the adult male collector. The form is hyper-sexualized: The breasts are oversized; the waist is tiny. When you make the figures sit, their legs splay open in a suggestive way.”

Rather than creating another female action figure based on an unrealistic Barbie-like physique, creators of the IAmElemental dolls worked tirelessly to create athletic, realistic characters that move the way kids want them to when playing. Nadeau explains, “We were obsessed with the breast-to-hip ratio. We were obsessed with the bum because so many of these figures have these incredible butt cracks on the back. We kept saying 'Bridge the gap’.”

After getting the measurements just right, the result is feminine yet tough action figures that look like they can hold their own in any battle. Each character in the set comes with its own virtue and power. One is based on Joan of Arc and has the virtue of Courage while the one with the Persistence virtue has the power to push through any obstacle.

What do you think about these new female action figures - who would you want to win one for? Tell us for the chance to win the action figure Courage!

Simply comment below and tell us who in your life would you want to win the action figure for?

Click here to Tweet: "Entered to win a female action figure and Toy of the Year Finalist thx to @SheSpeaksUp bit.ly/2lVFD7o"

*One lucky commenter or Tweeter will be chosen at random to receive Courage. Giveaway is open through March 12th, 2017 to U.S. residents at least 18 years of age. Entrants must be a member of SheSpeaks. If you are not a member, click here to join. Winner will be notified by email.

Update: Thank you to everyone who entered. Congratulations to winner, SheSpeaks member speakingofHER!