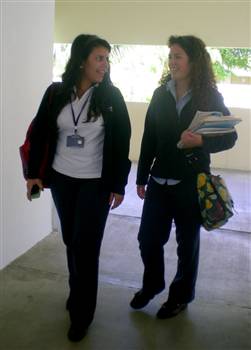 As the new school year sets in and we fall deeper in what some economists are calling a recession, many parents are struggling with the idea of buying a whole new back to school wardrobe for their children.  Some school officials in Newark, New Jersey hope to eliminate at least a little of the parents’ burden.

Newark’s new school’s superintendent Clifford Janey announced recently that he will require more than 30,000 students in various schools across the city to wear uniforms to school starting in the winter of 2009.  The schools will work with retailers to put together a low cost and flexible uniform for the children to wear.  On average a shirt may cost between $8 and $10.

With the news comes both resistance and open arms from students and parents.  On the downside, children may feel that they can no longer express their individuality at school the same way they had before.  Some children may feel peers who attend schools that don’t require uniforms will ridicule them.

But it does take a lot of the worry out of getting ready in the morning or feeling insecure about the way a particular outfit may look.  Kids will also be relieved of the pressure of feeling inadequate if they are not wearing the latest designer name jeans.  And for the schools’ staff, it will take the hassle out of enforcing a dress code all day long.

Some schools in Newark have already implemented a mandatory uniform.  Parents of the Elliott Street School lobbied to have uniforms for the students.  In 2003, the principal of that school, Angel Juarbe, mandated the uniforms.  Juarbe described the success of the uniforms to the Daily Newarker when he said, “It unified the students, promoted pride, helped students resist peer pressure and saved parents money.  That was the big thing, parents could buy one or two uniforms and it was much less expensive than an entire back to school wardrobe.”

What do you think of schools implementing a uniform as a way to help parents save money?

Would mandatory uniforms be something you would like to see in your child’s school?