It's already obvious - 2019 is going to be awesome. There's just so many incredible things to look forward to...

Let's start with the first SheSpeaks giveaway of 2019, where two winners can each win a $50 gift card to their favorite movie theater!

We've been waiting a long time for the next episodes of Game of Thrones and they are finally here. Almost. The final season will premiere in April, and little tidbits of info have been coming out slowly. According to TV Guide, there will be just 6 episodes, but they will each likely be close to feature-movie length. With a rumored budget of $15 million per episode, we're sure that these will not disappoint.

Though soccer isn't the most popular professional sport in this country, there's no denying that the US women's team rocks. They'll be defending their title in the FIFA Women's World Cup in France on June 7 - July 7 and we're can't wait to cheer them on.

2019 will be a year to look back and remember. Expect celebrations and ceremonies a-plenty. It's the 50th Anniversary of the Apollo 11 Moon Landing, which put the first two men on the moon (July 20). It's also the 75th Anniversary of D-Day and the Battle of Normandy (June 6) and the 100th year since the Grand Canyon was made a national park (February 26). 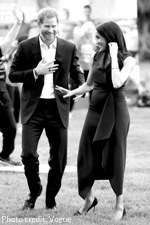 The Baby, Of Course!

It's the year of the American royal baby, and excitement is building on both sides of the Atlantic. Though the gender and exact due-date have not been revealed, we can't keep our eyes off Prince Harry, and Meghan Markle (not to mention, her incredible maternity wardrobe!)

Blasts From the Past

There will be lots of sequels and familiar faces at the box office this year. We're ready to buy our tickets for Downton Abbey (Sep 20), Men In Black: International (June 14) and Charlie's Angels (Nov 1). Though we admit that we're also excited to bring our kids to the live action version of The Lion King (July 19) as well as Frozen 2 (Nov 22) and Toy Story 4 (June 21).

What are you looking forward to in 2019? Tell us for the chance to win 1 of 2 $50 gift cards to your favorite movie theater!

*Two lucky constestants will be chosen at random to receive a $50 gift card to their favorite movie theater, provided that the gift cards can be bought easily online. Giveaway is open through January 27th, 2018 to U.S. residents at least 18 years of age. Entrants must be a member of SheSpeaks. If you are not a member, click here to join. Winner will be notified by email.

Update: Thank you to all who entered. Congrats to our winner, SheSpeaks member vivaciousgold!