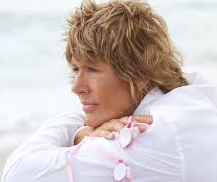 Share Tweet
21Add your comment
"I got three messages. One is we should never, ever give up. Two, is you never are too old to chase your dreams. Three, is it looks like a solitary sport, but it's a team. "

Diana Nyad, world record-breaking long distance swimmer, made headlines once again on September 2, 2013 – finally achieving her long-time dream of being the first person confirmed to swim from Havana, Cuba to Key West, Florida without a shark cage. She was 64 years old, and this was her fifth attempt at swimming the 110-mile feat, which she completed at 52 hours and 54 minutes! That's why they call her Xtreme Dream Nyad!

What compels a woman to keep diving in the same water where in previous attempts she has been thrown off course by ocean storms and treacherous currents, threats of sharks and deadly Box and Portuguese Man-of-War Jellyfish stings?

Simply – an "Xtreme Dream" and goal she couldn’t shake!

Diana’s first attempt at swimming this route was in 1978, at the age of 28 years old. Strong winds and 8-foot wave swells pushed her off-course towards Texas. Although she did not complete the swim, she did cover 76 miles and swam for 42 hours in a shark cage, under treacherous ocean conditions.

When Diana turned 60, her mother died and she found herself waking up from a vivid dream that she couldn’t shake. Exactly 30 years from her first attempt, at the age of 60, Diana came out of retirement and started training to make another attempt at the Cuba to Florida route. She finally realized her dream last September 2, 2013 - 35 years after her first attempt.

As she walked on the beach at the Florida Keys, Diana told reporters, “I got three messages. One is we should never, ever give up. Two, is you never are too old to chase your dreams. Three, is it looks like a solitary sport, but it’s a team.”

Throughout her lifetime, Diana has a track record of awe-inspiring feats in the water including:
• Setting the women’s record in 1974, for completing the 22-mile Bay of Naples race in 8 hours, 11 minutes
• The fastest swim around Manhattan Island, completing the 28-mile swim in just under 8 hours, which she set at the age of 26
• Setting the Open Water Long Distance World Record by swimming 102 miles in 27 hours and 30 minutes, from North Bimini Island, Bahamas to Juno Beach, Florida without using a shark cage

Diana has been publicly open that her determination in swimming has a lot to do with overcoming the sexual abuse she experienced as a child, by pushing to be special. In a recent interview with Little Pink Book, Diana commented, “I need to be special, more than abused, afraid, humiliated. And I am going to be more than that! As I’ve gotten older, I don’t operate out of that but in my 20s, 30s, 40s and early 50s, I was constantly pushing to be special.” Diana also adds, “I’m a person who is radically individual and irreverent. They told me: ‘A girl can’t be an athlete.’ I have always been defiant. No one is going to stop me. Everyone told me had I played the game better and been straight instead of gay and more mainstream, I would have gotten much farther ahead. You know what? If that’s what it takes, being someone you’re not, that’s just fine by me.”

We wanted to take a moment to salute Diana Nyad’s inspiring achievements in the sport of swimming. As a community of women, we feel it's important to recognize the achievements of women. Diana Nyad's achievement is a celebration for all women athletes, and a testament to the impact of the 1972 Title IX Education Amendment which made it possible for women to participate in athletic education programs and activities. Before Title IX, women made up just 7% of students participating in high school sports. By 2001, that number rose to 41.5%, an increase of more than 800%, bringing the number of female student athletes to over two million.

Congratulations, Diana and to your Xtreme Dream Team! Thank you for inspiring us to dream.

What achievements by other women have inspired you?

Share your stories with us, comment on this blogpost by  Monday - September 30, 2013 and you can win one of two $50 Visa Gift Cards.
You must be a resident of the USA in order to qualify.