Restroom Lines: Why Women Shouldn't Have To Wait 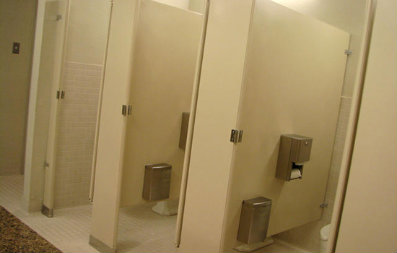 The Washington Post recently reported about the "Potty Parity" bill that is now going before the House.  Representative of the bill, Edolphus Towns, explained the problem during testimony.  Towns said, "I am certain that every woman in this room has frequently experienced the inconvenience, as well as the discomfort, caused by an insufficient number of women's restroom facilities."

Over the years more and more women have entered the workforce, but  a good deal of federal and office buildings have failed to keep up with the increase of women employees by adding extra restrooms.  People who support the bill have argued that lack of women's restrooms is not only an inconvenience, it can also lead to health problems.  Abdominal pains, cystitis, and urinary tract infections are just a few of the issues that can occur or be aggravated by waiting in long restroom lines daily.

Architecture professor, Kathryn Anthony, argues that being forced to wait in long restroom lines is also a form of gender bias.  Though the bill only calls for the equal number of restrooms, some argue that the number of women's restrooms should exceed the number of men's rooms in all commercial buildings.  The reasoning is that women need access to restrooms more frequently and for longer amounts of time than men due to physiological reasons like menstruation and pregnancy.

Rep. Darrell Issa, co-sponsor of the bill, has admitted that the bill should take into consideration that fact that some federal buildings, like the Pentagon, are filled predominantly with male employees and may not need to add restrooms for women.

What do you think of the "Potty Parity Act"?

Do you think that being forced to wait in long restroom lines is a form of gender bias?  Should there be more restrooms for women in all buildings because we need to access them more frequently?