Women Offer Words of Wisdom For Our New First Lady 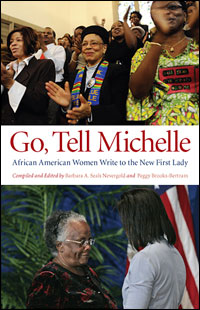 As we prepare for the historical inauguration of our first African-American president, two women offer words of wisdom from women all over the country.  Education specialists Barbara Seals Nevergold and Peggy Brooks-Bertram first got the idea for their book, Go, Tell Michelle, after seeing the cover of the July issue of The New Yorker satirically depicting Barack and Michelle Obama as gun-toting terrorists.

Seals Nevergold told The Buffalo News how the magazine cover made her feel, “Every Negative stereotype of a black woman you can imagine was embodied in that.”  Instead of getting angry Nevergold and Brooks-Bertram decided to turn the negative press into something positive.  After the election, the two women went online to invite other women from around the world to send in letters of support to Michelle Obama that would later be compiled and published as a book.  After many poems and words of wisdom from around the globe piled into their inbox, Nevergold and Brooks-Bertram chose 100 for their book.

The two women recently discussed with National Public Radio’s "All Things Considered” some themes that emerged from the letters they received. Brooks-Betram said, “One of those themes has to do with the issue of the interracial color line ? and women who very clearly point out that it was very important for them that Michelle Obama was a recognizably black woman for example.  That she wasn’t light-skinned with blue eyes and still classified as black, but rather she was a black woman and that it gave them a whole new feeling about their own lives.  I really thought that it was powerful, because that tends to be a subject that we don’t go towards so readily because it has such deep pain associated with it.”

Both women have been in contact with Obama’s transition team in order to get Michelle Obama a copy of their book, Go, Tell Michelle, by Inauguration Day.  Nevergold told NPR that she thinks Michelle Obama will “need that when she gets to the White House.”


What do you think of these two women publishing a book of letters highlighting the importance of our first African-American First Lady?

Do you think you will pick up a copy of Go, Tell Michelle?