Would You Want To Know? Food Labels Tell How Much Exercise Must Be Done To Burn Calories 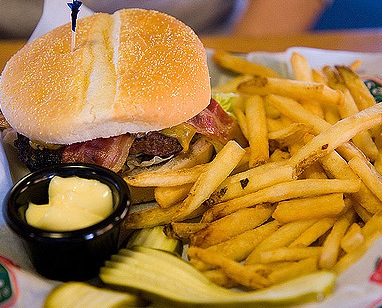 Ever wonder how much time you’ll have to spend on the treadmill for indulging in that extra large hunk of chocolate cake or the burger with fries you just couldn’t pass up? What if you could read about how many calories you’d have to burn right there on the label or menu before making your decision? Though the U.S. hasn’t shown much interest yet, the Royal Society for Public Health in the UK is pushing to get “activity equivalent” labels placed on products there.

CNN reports about the possibility of adding exercise equivalent labels to products so that consumers can be more aware of how much activity is required to stay healthy when eating certain foods. In an article published in the BMJ chief executive of the Royal Society for Public Health, Shirley Cramer, explains the aim of adding these types of labels to foods that already have calorie, fat counts, and ingredients clearly displayed. Cramer writes, “The aim is to prompt people to be more mindful of the energy they consume and how these calories relate to activities in their everyday lives, to encourage them to be more physically active.”

Though there has not been too many studies testing the effects of “activity equivalent” labels on foods, one study conducted and published in the journal Pediatrics found that the labels managed to change the way parents encurage kids to exercise. Parents involved in the study were not deterred by the exercise equivalent labels to order lower calorie options than the parents who only saw calorie counts. But the parents who saw the activity label were more likely to encourage their children to exercise after the meal.

Another study published in the NCBI found that teens shopping in a grocery store were less likely to buy fruit juices or sugary sodas when they saw signs saying they would have to jog for 50 minutes to burn the calories. But when calorie count signs were the only thing displayed for the same beverages, they had a lesser effect on teen shoppers.

James F. Sallis, professor of family and preventive medicine at University of California-San Diego, believes the labels may be useful but is also interested in seeing more studies conducted before bringing the idea over to the U.S. Sallis explains, “I think it's a good idea, but I'm a believer in evidence-based policy, so we need a fair bit more evidence before we would have a good justification for moving to a law.”

What do you think of the idea of “activity equivalent” labels?

What kind of effect would labels like this have on your shopping and restaurant ordering?