Would You Set Sail On A Cougar Cruise? 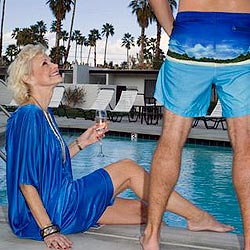 For many years now cruise lines have hosted theme voyages like singles cruise or  gay cruises aimed to get like-minded people together to enjoy a few days at sea.  But a new themed cruise is getting a lot of attention these days; the Cougar Cruise aimed to join together older women who are looking for younger men has caused some controversy among many.

The Norwegian Cruise Line is getting set to sail the Third International Cougar Cruise this week which is sponsored by the California based Singles Travel Company.  The first two Cougar cruises took place on Carnival and Royal Caribbean.  A recent article from USA Today discusses the latest cruise held for cougars with details like the unveiling of a new slot machine called the “Cougarlicious.”

The ship that is designated for the cougar voyage holds more than 2,000 passengers and will sail from Miami for three nights going to destinations like the Bahamas and a private island owned by the Norwegian cruise line.  The Singles Travel Company is organizing all of the events on board and is selling cabins starting at $99 based on a double occupancy cabin..

In the past, people, both male and female, who have attended these cougar voyages range in age from 25 to 72.  Upon arriving on the ship, the group that is participating in the Cougar Cruise get a special bracelet with the word “Available” stamped on it in order to distinguish them from the other cruisers.  After that participants do what a lot of other cruisers do when on board a ship.  They get to know one another, take part in activities like line dancing, have cocktails together, and so on.

What do you think of the idea of a Cougar themed cruise?

Would you ever participate in a themed voyage like this?