We all know the importance of taking the time to do regular self breast exams. But one woman wants to get the message out about an unusual symptom that led her to the doctor where she received the diagnosis of breast cancer without ever feeling a lump.

Today reports about the 37 year old mother of 3, Sherrie Rhodes, that noticed something a little different about one of her breasts while changing into a bathing suit. She shares a photo on Facebook showing some dimpling on the side of her left breast, which she says was the one and only sign she knew something was wrong.

Though most women are taught to feel their breast regularly for any lumps, Rhodes photo shows how even slight differences in appearance like the dimpling can be a sign of cancer. After seeing her doctor and having numerous scans and a biopsy, Rhodes recently confirmed her worst fear of a breast cancer diagnosis. 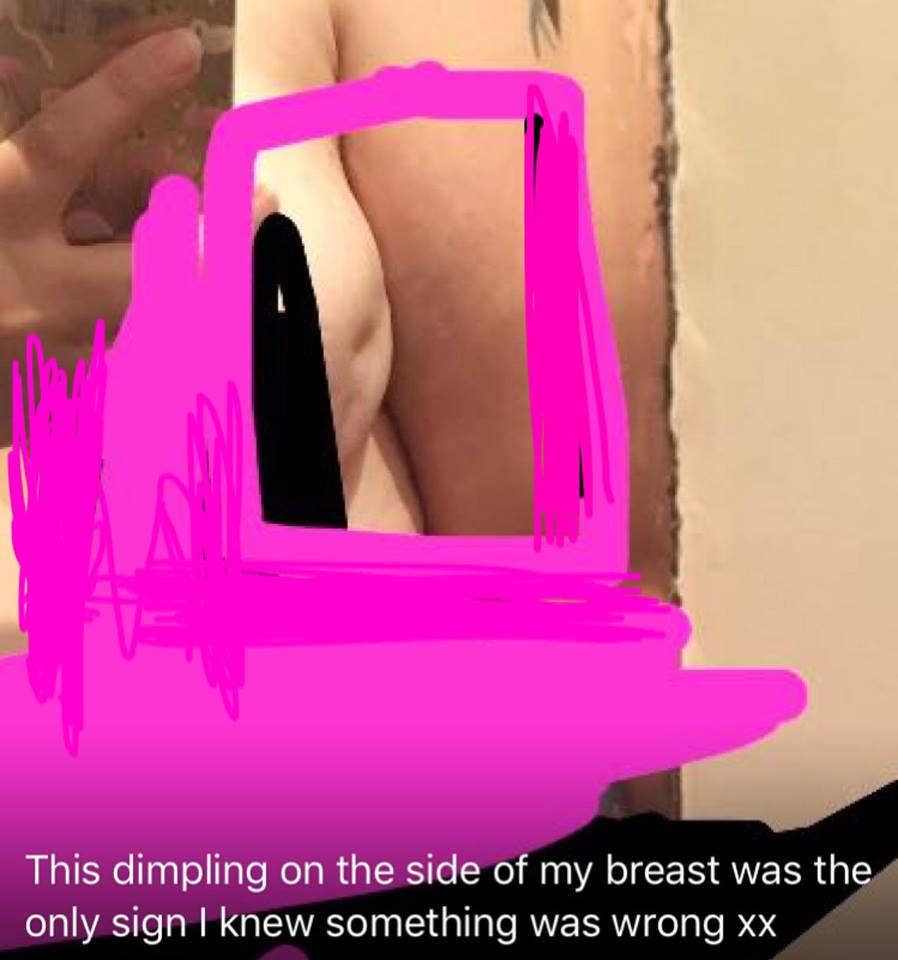 Rhodes only had an idea that something was wrong from the appearance of her breast, but wasn’t too worried since she could not feel any lumps. She shares on Facebook, “I wasn't too worried as there was no lump or anything. Unfortunately it came back as breast cancer. Please check your breast regularly and don't ignore anything that is different. If I hadn't seen a post like this previously I wouldn't have known that this dimpling was a sign of cancer. Please share and raise awareness.”

Rhodes’ experience is somewhat more rare, since most women will find a lump before seeing their doctor. But her experience draws attention to the importance of doing visual tests of our breasts and getting to the doctor when something doesn’t look right. Abnormalities to look for would be redness, dimpling, discharge, pain around the nipples, dents or skin irritations. Rhodes says she would be happy if her photo and Facebook share helps at least one woman to be more vigilant about her health. We’re thinking it will help even more!

What do you think about this woman sharing what led her to a breast cancer diagnosis?

Do you think more doctors should make their patients aware of what breast cancer can look like?

Wow life is so scary most of the time. There is always awful happening somewhere to someone. Brave women and lucky she found it.. Sad but good to know. Thanks for sharing!

YES! Dr's should. They should talk about and show everything they know of. Everyone is different. I think her sharing her story may help many more. We're all told to look for lumps, no one has ever said dimples, very good to know. Thank you for sharing this story!

I absolutely think Dr.'s should spread any sign or symptom they know! We should spread what we know, as well! A moment of ur time, sharing a little info. w/ others, could really change someone's life! Also, I pray Sherrie Rhodes has a full recovery from breast cancer & for lots of strength for her & her family!