Time To Celebrate! Curly-Haired Women Just Got Their Own Emoji

If you have natural curls you probably are aware of the struggles many women face to make it straight, especially when most of the images we see every day depict women with flawlessly sleek and shiny straight-as-a-pin hair. And after all, the phrase “we all want what we can’t have” rings true for many of us. But as part of Dove’s long-standing body positive message campaigns, they are hoping to help curly-haired girls by representing them in a place they have always been unrepresented - emojis.

Mashable reports about how Dove has lanched a curly-haired emoji as part of Dove Hair’s Love Your Curls campaign in an attempt to show young girls that curls are beautiful too.

You may have noticed that in the past Apple has only offered one hair look for emoji’s, which was the sleek straight-haired image we are all too familiar with. The new “Dove Love Your Curls Emoji’s” are now available at the App Store and allow the user to tailor the image to the perfect skin tone, curl style, color and hair length they wish to have represent them. And in an effort to get the word out, Dove has partnered with Twitter so that every time someone hashtags their slogan, #LoveYourCurls, a new curly-haired emoji will pop up. 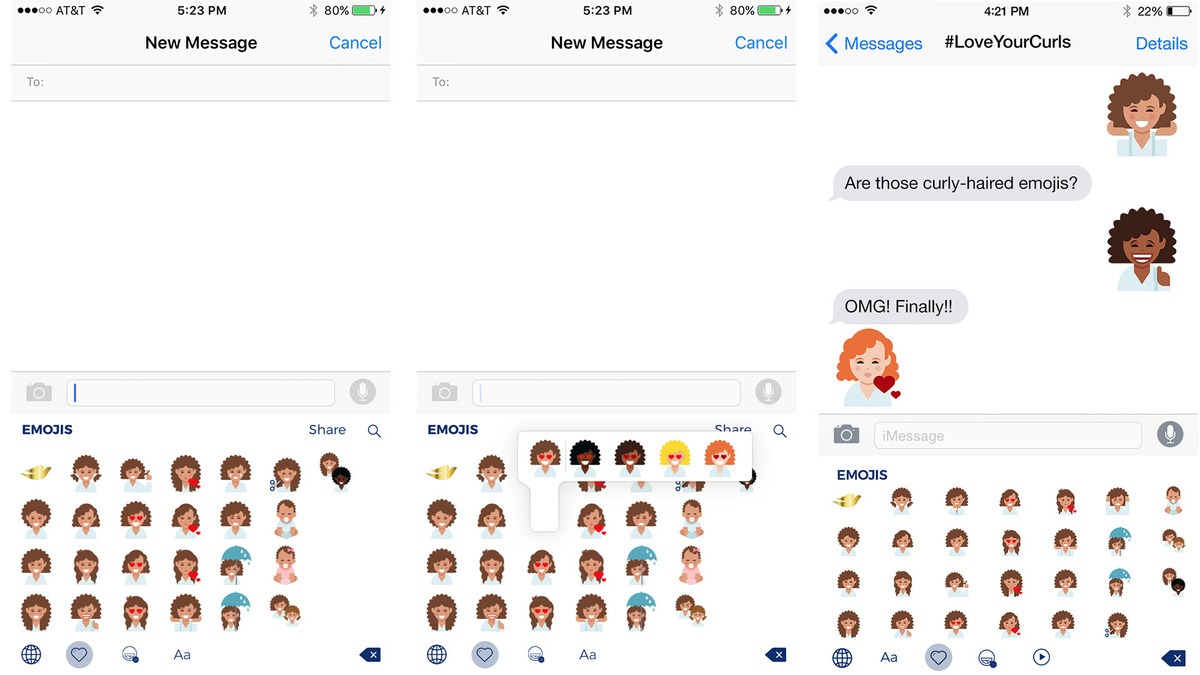 Dove is hoping that offering more choices in emojis will put a smile on curly-haired women that often feel under-represented. Dove VP of marketing Rob Candelino explains, “Knowing how prevalent and widely used emojis have become, it was saddening to us there remained no reflection of curly hair in the official keyboard, even after recent updates.” He adds, “The best part about using emojis is being able to express a feeling, thought or sentiment with an icon that is representative of you.”

What do you think of Dove’s effort to add curly-haired emojis?

Do you tend to show off your curls or do you prefer your hair straightened?

I think it was thoughtful of Dove to consider adding curly haired emojis. when I was in middle school, I remember feeling insecure about my frizzy curly hair and always felt the need to straighten it. Now I've come to accept and even embrace my curly hair because I know it would be kind of boring if everyone's hair looked the same.

I have crazy curls and am very happy that Dove is representing us! My two daughters have curly hair and I hope they come up with a good product for curls too! #LoveYourCurls

When I was a kid, I hated my curly hair. I learned how to straighten it and wore it that way for years. Now I LOVE my curly hair. I just wash, condition, brush, and shake. Done, and I look like I spent all day on it.

Some days I like it straight, other days wavy to curly depending on what wearing and where going.

I love my curls. And have enjoyed them for about 8 years now. I have loved it sometimes short or grown out long. All in all, I hope to have my little girl truly embrace it also compared to the pressure or fad to do the opposite like I once did.

When I was a teen, I fought my curls. Boy, what a mistake. Now, I love my curls and and I am so glad that I have them!

I adore my curly hair! In fact, now when it straightens out, I'll put it up (bun, French twist, ponytail) instead as the straight look is just not flattering on me. If only I could get back all the hours I wasted back in the 60s using clothes irons/empty Orange Juice cans/etc to get that swinging London look! BTW Dove, dig the campaigns you've been trying regarding self acceptance. Sure wish your new curly hair emojis were available for Android as well as Apple.