TV Shows to Watch This Fall + Your Chance to Win a Year of Netflix! 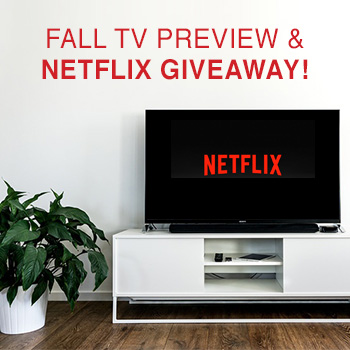 Are you grieving over the end of summer? Well, Fall 2016 TV season may cheer you up. With streaming services and networks combined, there are nearly 75 new series premiering on TV. In case you don't have enough time to watch them all, check out our list of shows-to-watch below.

What show are you most looking forward to? Tell us in the comments below for a chance to win a year's subscription to Netflix!

Sarah Jessica Parker is back in Divorce, 12 years after Sex and the City ended her relationship blues when she finally married Mr. Big. How much like Carrie Bradshaw will she be? Given that Catastrophe's co-creator Sharon Horgan is at the helm of this program, Parker will probably have more of a bite. We can't wait to tune in.

In American Housewife, Katy Mixon plays a middle-class homemaker in upper-class Westport, Conn. Created and written by Sarah Dunn, the show chronicles the daily life of an average wife and mother who tries to stand out among the wealthier housewives and their privileged children.

Amazon's Good Girls Revolt depicts the uprising of female assistants at a fictional publication, though it is based on what really happened at Newsweek back in the 1960s when men were taking women's jobs. The show has the same look and feel of Mad Men but with a lot more progesterone.

Gilmore Girls: A Year in the Life, Netflix, November 25th

If you're like us, you're really excited about the revival of Gilmore Girls: A Year in the Life. A four part series that brings back virtually every member of the cast, it's premiering Thanksgiving weekend. So be prepared to spend Black Friday in front of the tube!

What show are you most looking forward to? Tell us and you could win a one-year subscription to Netflix!

Simply comment below and tell us what shows you will watch this Fall.

*One lucky commenter or Tweeter will be chosen at random to receive a year subscription to Netflix, which will be given as a $125 Netflix gift card. Giveaway is open through September 25th, 2016 to U.S. residents at least 18 years of age. Entrants must be a member of SheSpeaks. If you are not a member, click here to join. Winner will be notified by email.

Update: Thanks to all for entering! Congratulations to our winner: SheSpeaks member Birdiebee.