Stressed Out at the Airport? Go Find a Nice Warm Dog to Hug 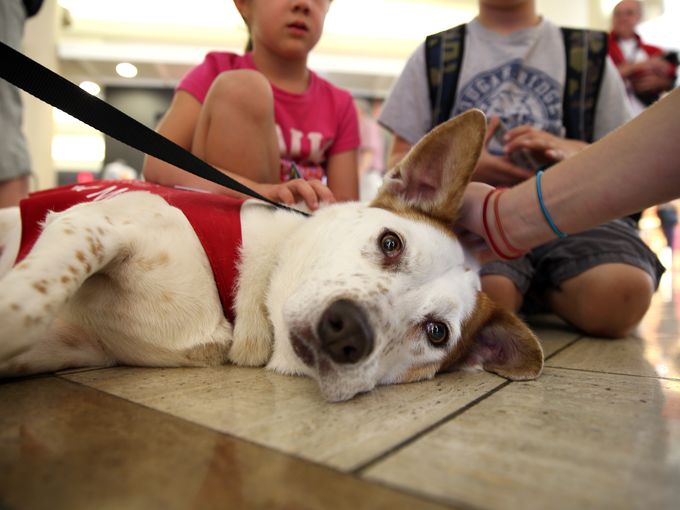 With the holiday travel season upon us and all the anxiety delays and cancellations can bring, it’s nice to hear about a pretty sweet de-stressor that’s got many airline passengers smiling. Airports across the U.S. are adopting therapy dog programs for both passengers and employees to try and take some of the anxiety out of air travel.

USA Today reports about the therapy dog programs that many have already embraced in 27 airports across the country. The program started after an interfaith chaplain volunteer at Mineta San José International Airport (SJC) brought her certified therapy dog to the airport to support passengers and employees after the events of September 11, 2001 brought anxiety about air travel.

It’s now 13 years later and therapy dogs of many breeds like Golden Retrievers, Cocker Spaniels, and Miniature Shnauzers are now greeting passengers in the terminal allowing them to hug and pet them. The therapy dogs are certified by Therapy Dogs International (TDI) which assures that they are non-aggressive, like to be petted and hugged even in the middle of a busy airport terminal.

Los Angeles airport (LAX) has partnered with a program called PUP and has seen a lot of success when it comes to easing the stresses in the terminal. PUP program director Heidi Huebner explains how passengers and employees react when the therapy dogs are present. She says, “When the dogs are in the terminals you can feel the stress level drop. Expressions change. People look up from their laptops and their phones. They take pictures. They come over to pet the dogs. Conversations start between strangers. And even people just passing by begin to smile.”

Another therapy dog program called Paws For Passengers at Reno-Tahoe International Airport that began last year is already seeing the benefits. Reno Airport spokeswoman Heidi Jared explains, “One of the most rewarding experiences has been to watch the WWII Honor Flight veterans interact with our therapy dogs and each time, the veterans get a big smile on their face when they pet the dogs or when they come around the corner from security and are greeted by the entire four-legged team with the handlers waving flags and cheering on the veterans.”

What do you think of the therapy dog programs adopted by airports across the U.S.? Do you think dogs can help reduce airplane travel anxiety and the stress of being at the airport?

Would you be happy to see a four legged friend on your next travels?