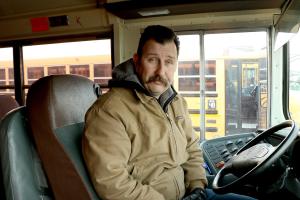 Washington bus driver John Lunceford was going about his daily routine of driving a school bus when one child’s lack of winter attire made him stop and think. When picking up one of his regular students on a bitterly cold morning he realized the boy was not wearing any gloves or a hat. And when taking a second look and seeing that the boy was in tears with his cold red hands and ears, Lunceford put his own gloves on the child to warm him and assure him he was okay.

CBS News reports about the story that has now touched thousands due to a Facebook post sent out by the school district that has been shared many times. After dropping all the kids off that day, he went right out to his local dollar store and began purchasing multiple hats and gloves for all the students who were having to go without. He then drove back to the school and found the boy who had been so cold that morning studying in the library and gave him a pair of gloves and a hat. Lunceford explains, “I’m a grandfather, you know. No one wants a kid to suffer like that.”

The school district also explained what Lunceford did next, “He told all the students in the school’s library that if they were on his route and didn’t have hats or gloves, he’d take care of them.” Lunceford, who is a U.S. Army veteran, feels a special place in his heart for those kids on his bus route that must endure a cold winter without the proper clothing. Many reading the Facebook post are calling Lunceford a “hero” for what he did, but Lunceford is the first to point out that he is simply doing his job.

What do you think of this touching story about a school bus driver giving out winter hats and gloves to students in need?