RSVP for the #LiptonKCups Twitter Party on Thursday, October 10 at 1pm ET!

As you’re hustling through your busy days, something as simple as a cup of tea – hot or cold - can be the perfect way to help you recharge. Join us for the #LiptonKCups Twitter Party on Thursday, October 10 at 1pm ET. We’ll tell you all about how Lipton® has put a fresh spin on tea and made your next cup easier than ever with its new packs for Keurig® K-Cup® single cup brewing systems. We’re giving you lots of chances to win fun prizes from Lipton and Keurig – we’re giving away over $3,000 in prizes!

Twitter Party Topics:
We’re putting a fresh spin on tea with Lipton’s brand new K-Cup packs for Keurig brewers! We’ll tell you all about the three new Lipton flavor varieties: Lipton REFRESH, Lipton INDULGE and Lipton SOOTHE. Your next cup of tea – hot or iced – is now as simple as the touch of a button. We’ll be chatting about the ways we take time out to refresh, indulge and soothe during and after our busy days. Plus, we’ll be announcing all the details on our awesome upcoming Lipton Pinterest giveaway! 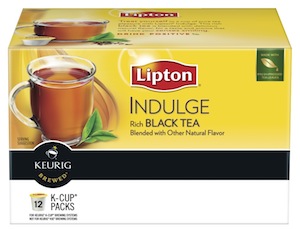 *Prize winners must be following @SheSpeaksUp on Twitter and be participating in the discussion to win. Open to United States residents only. One prize per winner. No purchase necessary. Twitter Party prize winners must complete a form with mailing details within 48 hours of the party. The form will be DMed if you win a prize.

TRIED TO RSVP EARLIER BUT IT WOULDNT LET ME CREATE AN ACCOUNT!

Holiday Gift Ideas For the Chef in Your Life