Mommy's Little Estudiante: Why Kids Should Be Bilingual 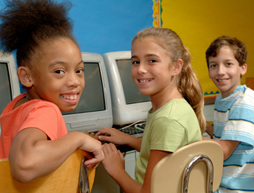 As I child, I remember my morning cartoons being interrupted by frequent advertisements for a series of BBC language-learning videotapes. The ads promised that by watching the tapes, which featured cartoon animals counting and singing in French, German, and Italian, kids could easily and enjoyably learn a second language, thereby gaining an academic advantage for life.

Parents have been foisting language lessons on children for years; I myself spent many a childhood Saturday learning Spanish at the local university (except I learned the hard way?no cartoon animals in sight). Until recently, it was uncommon to study languages other than European ones, but I now have friends whose children study Japanese, and my former high school in Ohio even offers classes in Mandarin. The value of knowing more than one language is indisputable, and most people believe in the value of teaching languages when a child is young. But how do children learn languages so quickly, and what are the most useful ones for today’s kids to study?

Start ’Em Young
Some parents urge their children to learn a second language because they want to prepare them for a multicultural and diverse world and enhance their job prospects, and some just want their kids to enjoy an educational experience they never had themselves. Regardless of the reasons, studying foreign languages provides proven academic and cognitive benefits for children. According to the Cornell Language Acquisition Lab, kids who are bilingual can actually pay attention in the presence of distracting stimuli better than kids who are monolingual, and the College Board reports that students who have studied a foreign language score better on the verbal portion of the SAT than students who have studied only English do. There’s even research that suggests that studying a foreign language can improve students’ math scores. Whether the goal is complete fluency or just a passing familiarity, knowing a second language?whatever it is?undoubtedly builds the cognitive pathways that lay the foundation for future academic success.

But why is it so important to become bilingual as a child? Since the 1950s, linguists and psychologists have been postulating that humans are born with an innate ability to quickly and intrinsically learn the structure, syntax, and grammar of their native language, but that the ability fades after childhood. Experts have proposed “nativist” theories of language learning, which said that the brains of human children are especially primed to learn languages, because of both the rapid growth of neurons before puberty and what psycholinguist Noam Chomsky called the Language Acquisition Device. According to Chomsky, the LAD is a part of the brain that allows children to absorb and mimic language, even though their exposure to the language might be broken or incomplete. Although the prevailing opinion today is that children’s language abilities are the result of a combination of nature and nurture, there’s virtually no argument that something happens during childhood that allows kids to absorb the foundations of language.

Easy as Un, Deux, Trois?
Even though children have a special capacity, it’s wrong to assume that they can effortlessly pick up any language, especially just by watching videos or taking a few classes. “Early learning is incredibly important, but in non-immersion environments, it’s slow going,” says Rachel Meyer, owner of San Francisco’s ABC Language School. She notes that it’s a big but common mistake to assume that children can achieve fluency by taking just one class per week, especially when they’re not speaking their new language at home or in school. Although some parents expect their child to become fluent, it’s more reasonable to hope that the child will simply reap the cognitive benefits and gain some exposure to a new culture. Meyer says, “If you truly want success for a child in acquiring a second language, keep expectations realistic.” Meyer sees many parents who get frustrated when, after a year of language study, their children still aren’t proficient. “With a once-a-week class, children will have only rudimentary language skills,” she says. “They will not be fluent. The most successful parents understand that and stick it out.”

The most popular programs for kids at ABC Language School (which also has locations in New York and Washington, D.C.) are those in Spanish, Mandarin, and French. When parents are choosing a language for their child to study, Meyer advises that it’s not about what languages might be most useful or important in twenty years?the most important criterion is identifying a particular language’s relevance in a child’s life. Even though almost a billion people speak Mandarin, if a family doesn’t have Chinese friends, travel to China, or present other opportunities for a child to experience the language, it might not be a good choice, despite the fact that it might look impressive on a college application. More accessible languages, like Spanish and French, are enduringly popular not only because they offer more chances for children to use their skills, but also because they make it easier for parents to see progress and give help?since, even if parents don’t speak either language, it’s likely that they know some basic words and concepts. “Choose a language your child will get excited about,” says Meyer, “and if you keep plugging away, your kids will, too.”

Ultimately, most children who spend their Saturdays in language class are not going to become fluent and carry those skills through to adulthood. What parents should hope for is that kids develop basic language skills and enjoy their exposure to another culture. Meyer says that it doesn’t really matter what language a child studies, because as long as kids learn the basics of grammar, syntax, and the accent of any language, they will have an easier time with the languages they choose to study in the future. Even though young kids may not achieve fluency?or even proficiency?they are still learning and building neuronal connections that will help them in every subject they pursue. “In terms of what a child can produce, it may appear to be less,” Meyer states, “but when they’re older, they’ll learn ten times faster than someone who was never exposed to a language.”