Lovin' these Songs of Summer & our #BeatsGiveaway. Enter to Win Solo2 Headphones! 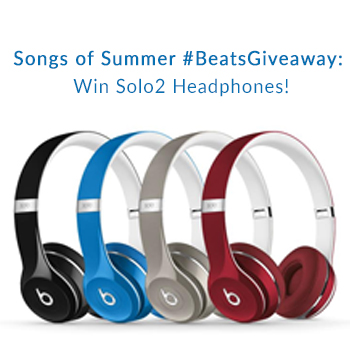 Whether you just want to rock out on your road trip or have a zen moment in your own backyard, we’ve got some of the catchiest tunes you’ll be listening to this summer. The summer of 2016’s songs are sure to inspire dancing and singing, no matter where the season takes you.

And now you have the chance to listen to these tunes through the fine-tuned acoustics of Beats Solo2 Headphones ($105-170 value). Read on to learn how you can win this gotta-have-it accessory in our #BeatsGiveaway!

If there’s something Justin Timberlake is flawless at it’s coming out with a beat that will make you want to dance. As a bonus he’s also released two really fun videos to go along with his new hit, “Can’t Stop the Feeling”. This song can easily be added to any summer workout mix to put that extra bounce in your step.

Now that you’re in a dancing mood, Drake’s newish song “One Dance” featuring WizKid and Kyla is both dancey and dreamy - a perfect backdrop to go along with the scenery whizzing by on that summer road trip. But you probably already knew that since Forbes reports that the song has been number one on billboard charts for eight weeks now.

Gwen Stefani fans have something to be thankful for this summer and that’s her latest hit “Misery”. Another song to add to your break-up mix, it’s catchy and sure to have you singing along from the very first listen. Though Stefani’s current love Blake Shelton is pretty much expected to throw lover her way, the song is truly a solid hit. Shelton is qoted in EW simply saying, “I would be a really not-smart person if I didn’t say my song of summer was this one.”

Everyone knows the best songs are breakup songs and a new one called “We Don’t Talk Anymore” from Charlie Puth features Selena Gomez who is famously well-versed in boyfriend troubles. Artist and song-writer Mozella is qoted in EW saying, “While I can’t read the future, I have a good feeling about this. It’s really catchy and fun and feels like something you want to sing along to with the windows down all summer.” So go ahead and give it a listen with the windows rolled down.

And between those upbeat summer hits, maybe take a few minutes to chill with the band Whitney. Their new song “No Woman” is great for those quiet moments shuffling down the street wearing your earbuds and enjoying the warm weather. Matt Miller from Esquire writes of the song, “Vocals like fluffy clouds, a guitar hook like a soft breeze, and a triumphant horn section: ‘No Woman’ is the road-trip soundtrack this summer.”

What songs have you been listening to this summer? Tell us and you could win a Beats Solo2 Headphones in your choice of color ($105-165 value)!

Simply comment below and tell us your favorite recent songs(s).

*One lucky commenter or Tweeter will be chosen at random to receive a Beats Solo2 Headphones (winner's choice of color, $105-170 value)! Giveaway is open through July 31st 2016 to U.S. residents at least 18 years of age. Entrants must be a member of SheSpeaks. If you are not a member, click here to join. Winner will be notified by email.

Update: Thanks to all for entering! Congratulations to our winner: SheSpeaks member Angelwolfstorm.