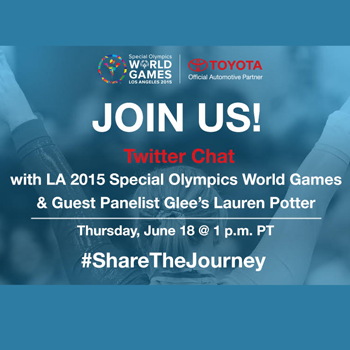 Join us for a Twitter Chat today, Thursday, June 18 at 4pm ET to celebrate the Special Olympics World Games, which will be hosted in LA from July 25-August 2!  Guests at this chat will include actress Lauren Potter (@TheLaurenPotter) of Glee fame and 2015 World Games Global Messenger Dustin Plunkett (@DustinPlunkett), to answer your questions and help you cheer on athletes. Join to hear their stories and learn about the Special Olympic World Games.

*Prize winners must RSVP by commenting on this blog post with their Twitter handle (e.g. @SheSpeaksUp) and participate in the discussion on Twitter by using the hashtag #ShareTheJourney on Thursday, June 18, 2015 between 4pm and 5pm ET to be eligible to win. Open to United States residents only. One prize allowed per winner. No purchase necessary. Winners will be chosen at random and notified via email on Friday, June 19. Prizes will not be awarded during the Twitter Chat.