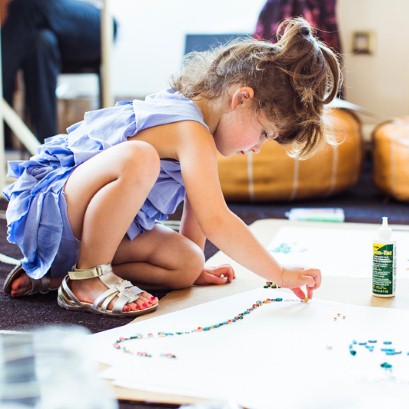 The crafty and creative 5 year old known simply by her nickname “Mayhem” never expected that the fun she and her mom have together making dresses out of paper would lead to a career in fashion. But Mayhem and her mother, Angie Keiser, were absolutely delighted when big name fashion brand J. Crew reached out to talk about Mayhem (real name Sydney) creating a fashionable clothing for kids.

The Telegraph reports about J. Crew’s youngest employee, Mayhem’s new capsule collection for kids that she had a surprisingly big hand in creating. Mayhem and mom Angie Keiser had received some attention from a blog, FashionByMayhem in which mom and daughter design dresses out of paper. Mayhem’s mom explains on the blog how they started making dresses out of paper because she was sick of her daughter playing dress-up with her clothes and leaving them “strewn about her room.” They have made dresses out of all sorts of things like gift wrap, toilet paper, and even athletic tape. Mayhem got very into the hobby and even began making the dresses all by herself.

Angie Keiser explains how surprised they were when they received the call that J. Crew was interested in having Mayhem help design clothes. She says, “We were most definitely a little surprised at first, but very excited that a brand we already loved - and had hanging in our own closets - would want to work with us in such a unique way.”

After Mayhem and her mother were flown into New York City they were escorted to the J. Crew offices to begin work/play on the kids clothing line. Head designer for Crew Cuts, Jenny Cooper, explains the process of designing clothes with such a young fashionista. Cooper says, “I think I was prepared to do a lot more guiding than we actually did. She is very definitive about what she likes.”

Mayhem’s mother explains how the designing process was somewhat simple because it was a lot like what they do at home when they play. She says, “When it was time to design, we sat on Jenny's office floor and played pretty much like we do at home. Mayhem then put together her own design board, choosing colours and fabrics, and the rest of the playing and designing kept those colours in mind.”As for Mayhem, she is very excited to see her creations come to life and can’t wait to wear them herself.

What do you think of this young fashion designer’s new clothing line?

What kinds of ways do your kids get creative with dress-up?