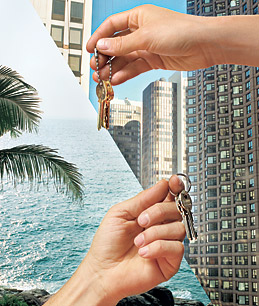 Although for many of us vacations are being put on the back burner this summer, there may an affordable way to get out of town for a few days.  House swapping is soon becoming a growing trend among vacationers who are trying to keep their travels as thrifty as possible.

The idea of trading homes with someone else who is traveling is not new.  You may remember the 2006 movie The Holiday starring Kate Winslet and Cameron Diaz where the two women are depicted as switching homes (a Los Angeles mansion for a quaint English cottage) over the Christmas holiday.  According to a recent Time magazine article, the company Intervac has been setting up home exchanges for people since 1992.

Though not new, it is just now that these services are reporting dramatic increases in the rate of house swapping.  The website HomeExchange.com has seen a more than 30 percent increase in their membership this last year.  Home swapping has become so popular because it eliminates the huge cost of hotels on vacation.  Depending on where you live, it may or may not be simple to find a suitable swap.  For example, if you live in a nice apartment in the heart of Paris, France it may take less time for you to find someone willing to swap than if you live in a small town in say Virginia.

The idea that one man's shack is another man's castle could certainly apply here.  Kathleen Dwyer, a home exchanger for six years, reported to Time magazine about a swap experience she had when she traded her one bedroom Manhattan apartment with a view of the alley for an upscale California home on a lagoon with a view of the ocean.  Dwyer said, "The got this little, small apartment, and I got this million-dollar home.  I laughed at the trade, but they were happy to be near their daughter in Manhattan, so it worked out fine."

What do you think of the idea of swapping homes with a stranger during a vaction?

Do you think you might consider home exchange on your next trip?