Get Inspired By Maysoon Zayid, An Arab American Comedian with Cerebral Palsy 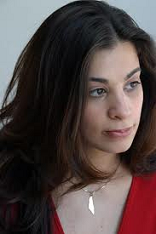 Share Tweet
5Add your comment
Maysoon Zayid is a disabled Arab-American comedian who believes that laughter is the best medicine. At the beginning of her recent TED talk, she told her audience, "I have cerebral palsy. I shake all the time. I'm like Shakira meets Muhammad Ali."
In her fourteen minute talk, while sitting alone on a stage, she explains how her illness developed in infancy, how her father taught her to walk with her heels on his feet, how she became an actress, stand-up comic, phllanthropist and advocate....despite all her obstacles. Zayid also tells us not to feel sorry for her, or any disabled person, for that matter. Everyone has talent and power, regardless of their setbacks. "I've got 99 problems and Palsy is just one" she assures her audience.
She's proud of her achievements, and deservedly so. She has tap danced on Broadway. She appeared in a film with Adam Sandler (You Don't Mess with the Zohar). She worked with her idol, Dave Matthews. She was a delegate representing New Jersey at the Democratic National Convention in 2000. She performed in front of Muhammed Ali. She's considered one of America's first Muslim women comedians.
The audience at the TED talk was raptured by Maysoon's composure, wit and intelligence, and you will be, too. We urge you to watch it for a big source of inspiration AND to learn more about Cerebral Palsy (54 seconds into the video).
Tell us - do you use humor as a tool for healing?