Celebs Depicted In Shocking Domestic Abuse Campaign, But Were They Asked To Participate?

The issue of domestic violence is often not talked about, but when you are faced with the physical evidence of bumps and bruises it becomes impossible to ignore. This was probably the idea behind artist aleXsandro Palombo’s anti-domestic violence campaign that features photoshopped pics of some of the most famous celebs out there like Madonna, Angelina Jolie and Kim Kardashian.

Hollywood Life reports about the photos that depict these women with black eyes, cuts, scrapes and bruises all over their face. The celebs featured in the photoshopped pics include Miley Cyrus, Kendall Jenner, Kim Kardashian, Angelina Jolie, Madonna, Kristen Stewart and Gwyneth Paltrow. All of the photos are captioned with the words, “Life can be a fairytale if you break the silence. No Woman is immune from domestic abuse. #StopViolenceAgainstWomen.”

The photos are so shocking and realistic that they really help to drive home the artist’s message about the need to be more open about domestic violence. Palombo says, “The biggest accomplice of violence is the silence. A silence which every year kills or causes disability more than diseases or accidents. Domestic violence is a cancer that knows no boundaries nor social status, it can affect anyone, whether you’re an ordinary person or a celebrity. To defeat him you need to use the antidote of culture by educating and raising awareness on Respect and Equality. Each of us has to do their part to help increase awareness and to change things by any means.” 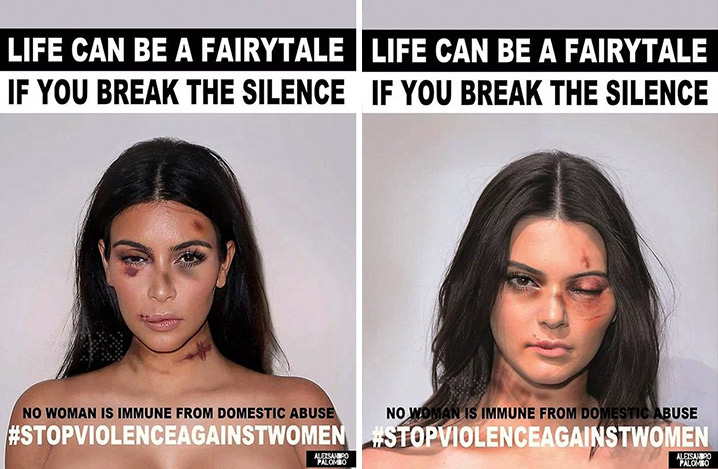 Though both Kim Kardashian and Kendall Jenner say that they stand by the artist’s message, TMZ reports that both celebs are not happy that their images were used in this campaign without their permission. Their attorneys are currently getting in contact with the artist to resolve the matter and both sisters say they wish they would have had the right to choose whether they were involved in the campaign.

What do you think of this artist’s anti-domestic abuse campaign depicting celebrities with battered and bruised faces?

Do you think he should have received permission from the celebs to use their images in this way?

I believe that people should definitely be asked before their faces are plastered all over the media for causes and different campaigns.