Growing up, I lived on and off with my grandparents along with my aunt and uncle.  My uncle was invoved in an accident that left him blind around the age of 10. That did not keep him down; he ended up graduating high school, going on and graduating from Seminary School and evenutally becoming a minister and director for one of the top residential centers for the mentally and physically handicapped in Ohio.

He had to learn a new way to read and to communicate.  It turned out to be a learning experience for the whole family.  Of course, it took us a lot longer then it did my uncle.  He began teaching himself Braille and over the years we all became proficient at it.  Braille allowed us to correspond with my uncle after he left home through cards and letters.  If we had not learned it, the loving cards and letters we sent to him would have had to have been read aloud to him.

January is National Braille Literacy Month.  January was chosen for this celebration because it is the birth month of Louis Braille, the inventor of the system of raised dots that made it possible for people who are blind to read and write for themselves with independence and freedom.

Who was Louis Braille?  Louis Braille was born near Paris and was blinded in an accident when he was only three years of age. He tried to keep up in school by listening to the teachers but he became very frustrated.

Taking from an invention called "night writing" Louis trimmed the hard to learn code down from 12 raised dots to just six.    By the time Louis was 15 years old he had published his first braille book.  Louis Braile made it possible for my family and millions of other familes the opportunity to learn and to communicate using his amazing braile system. 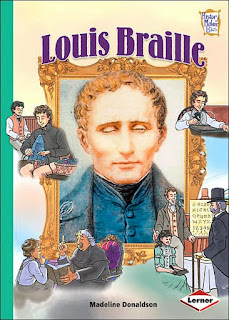 What can you do to celebrate National Braile Literacy Month?

I was just at the goodwill near my house and I saw the cutest childrens book printed in braille. i wish i knew someone who could use something like that. Its one of the things that would be perfect for someone, I just don't know who.

Thank you, Vickie for this very informative article. As someone that is visually impaired, I truly appreciate you bringing awareness to this topic. As I slowly lose my sight, I would be beside myself if braille was not an option for me. I am an avid reader and would hate not being able to lose myself in a good book. I just started learning Braille, and I am so thankful that it is available for the millions of visually impaired people around the world. Again, I thank you for sharing and celebrating National Braille Literacy Month!