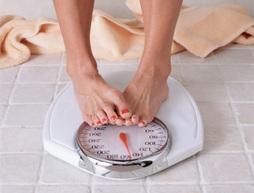 The endless parade of diet advice can be maddening. Cut the fat. Avoid sugar. Banish carbohydrates. Whoops?now some carbs are okay; just watch out for refined flour. Do less cardio. Don’t eat after dark. Fast before you exercise. Don’t eat white food. Don’t buy ingredients you can’t pronounce. Don’t cook anything to above 104 degrees ?

That was the sound of my face hitting my desk.
How can anybody win? When any given food item is bad for you one day and good the next, and when scientists and dieticians can’t seem to agree on what or how we should be eating, it’s hard not to get frustrated. Luckily, there’s one way to manage food intake and weight that requires no diet books, no special equipment, and no extra money or effort. In fact, the only thing you need is time.
Mother Knows Best
Ever since the 1970s, some people have claimed that the speed at which we eat has a big effect on how many calories we consume. This theory proposes that when we eat quickly, our stomachs don’t have time to tell our brains we’re full, and that lost signal leads to overeating. By eating slowly and deliberately, on the other hand, we give the hormones that indicate satiety a chance to function properly.
Until recently, the theory was unproven? an old wives’ tale?but several recent studies have confirmed that your mom and grandma have been telling the truth: when we eat more slowly, we eat less.
A 2006 study at the University of Rhode Island (URI) monitored thirty women as they ate two meals. They were instructed to eat the first meal quickly, and for the second meal, they were asked to chew each bite at least twenty times before swallowing. During the fast meal, the women consumed an average of 646 calories in nine minutes, while at the slow meal, it took them twenty-nine minutes to eat only 579 calories.
Another study, from 2004, turned up similar results. The female participants ate meals at varying speeds, and during meals at which food intake was regulated, they ate less than when they were allowed to eat quickly.
The author of the URI study found that not only did the women who ate slowly end up consuming fewer calories, but they also reported feeling fuller after eating, and that feeling lasted longer. Eating slowly has been shown to increase the body’s response to hormones produced in the digestive tract. These hormones, glucagonlike peptide-1 and peptide YY, have a more pronounced effect when we eat slowly and can more easily signal the brain that it’s time to stop eating. When we wolf down our food, these hormones don’t get released as quickly, and their effect is diminished. All in all, it takes at least fifteen to twenty minutes for the gut to signal fullness and for the brain to get the right message.
The Diet Downer
For every piece of diet advice, there’s always a naysayer. One researcher at the University of Pennsylvania claims that although eating slowly may translate to eating less, it’s not so effective as a weight-loss method. Her study, conducted in 1991, showed that in the initial stages of weight loss, eating slowly makes a difference, but after several months, there is no distinction between slow eaters and quick eaters. The UPenn team also hypothesizes that even though eating slowly can reduce the number of calories per bite, most people still end up eating the same number of calories in the end?they just take longer to do it.
If the many studies confirming the benefits of eating slowly are to be believed, consuming just slightly fewer calories at each meal can really add up over time. The numbers from the URI study may have shown only a 10 percent decrease in caloric intake, but that 10 percent can be significant, especially in conjunction with a healthy, low-fat diet and moderate exercise. Eating slowly is better for digestion, too.
The truth is that there’s probably no “magic bullet” for weight loss. The cabbage soup diet, the grapefruit diet, the caveman diet, and all the other fad eating programs are unsustainable and unrealistic. Eating slowly may seem elementary, but it’s a small lifestyle change that can make a big difference.
Originally written by Allison Ford for DivineCaroline.com

"several recent studies have confirmed that your mom and grandma have been telling the truth: when we eat more slowly, we eat less. "